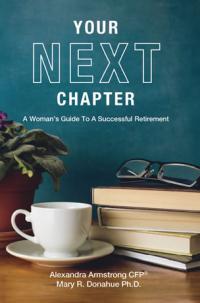 Update on Your Next Chapter

Five months ago, we published “Your Next Chapter”.  This was a very different experience from our previous one, when Dearborn first published “On Your Own: A Widow’s Passage to Emotional and Financial Well-Being” in 1993.  We didn’t know how spoiled we were!  Dearborn hired a publicity person to promote our book. They paid for the two of us to go on a nine city media tour with someone assigned to take us around for newspaper, television and radio interviews in the major cities (Boston, New York, Washington DC, Chicago, Los Angeles, San Francisco, etc).  We even were guests on Good Morning America. It worked, as we sold over 25,000 copies of the book which even in today’s world is good.  “On Your Own” is now in its fifth edition written in 2012 and still selling on Amazon.com.

We got the idea for “Your Next Chapter” when we were having lunch together and discussing why neither of us had retired at the age when most people plan to retire—at  age 65. The answer was both of us loved our jobs and were fortunate because our professions as a psychologist and a financial planner allowed us to keep working—and so we did.  However, in our discussion and subsequent research, we realized there was a void and a need for a book for women like us.  Most books about retirement give general advice. They focus only on the financial aspects of retirement and ignore the emotional aspects.  We thought there was a need for a book which would help educated women with assets and a meaningful career make decisions which would result in a more satisfying retirement.

We spent the next two years working on this book. To make sure that our book would be more than just another how to book, we wove the stories of four women through it to help our readers relate more to the content.  We include two married women (one with a career and one without), a divorcee and a single woman.  It is divided into two parts: the first focuses on the period right before a woman retires and the second on the first few years after she retires. It

When we finished writing the book, we prepared a proposal to submit to a publisher. However, after talking to several experts, we were advised to self-publish. While I won’t go into all the reasons why we made this decision, we weighed the pros and cons and decided this route was best for us. We understood that while it is true if you self-publish, most local bookstores won’t stock you nor will most national media cover you; you have much more control over the content and the promotion. We chose to print on demand, which means you don’t have to have stacks of books in your garage.  Also, those multi city media tours are a thing of the past unless you are Michelle Obama.

I won’t say the process was easy as the people at self-publishing companies expect you to be very computer savvy and that isn’t a long suit for either Mary or myself.  However, with the help of Mary’s daughters and the staff at Armstrong, Fleming & Moore, Inc, we struggled through the process and finally were ready to release the book.  The first set back to publication came at the end of 2019, when the age for the required minimum distribution age for IRAs was raised to 72. This meant changing the required minimum withdrawal tables for IRAs as well as the stories of our four women, but we managed to do that over the year-end holidays.  The more devastating blow for multiple reasons was the Covid 19 pandemic.  Plans for book signing parties and promotions went out the window!

Initially we delayed publication, but by May,  we decided that we shouldn’t postpone publication any longer.  Indeed,  we realized that perhaps there might be more of a need for our book. In some cases, many who hadn’t expected to retire, had no choice but to retire. In other cases, professionals such as teachers and medical professionals chose to retire to protect and care for family members.  In addition, although we wrote our book specifically for women, we have received favorable feedback from men who have read it and found much of the advice helpful to them as well.  It also helped them understand how their wives’ adjustment to retirement might be different than their own.

As for promotion, we were told that we needed to have a website and a blog.  Of course, we didn’t have the faintest idea how to do that, but as with everything else there are people who can help you.  Once again, Mary’s daughter took over this project for us, helping us understand why we needed a website and needed to keep it relevant by posting regular blogs. While we haven’t been as faithful to this task as she would like, we promise to do better in the future.

In mid-September, we had two zoom sessions.  The first was a members-only event for Cosmos Club members where a past president of the Cosmos Club, interviewed us. The second one on September 16th was open to the public under the auspices of the Georgetown Village, a flourishing aging in place organization.  We were introduced by their executive director, Lynn Golub-Rofrano.  If you want to check it out, go to https://youtu.be/BCeiZtupMc.  For these interviews we had to develop our zoom appearances, what to wear, what background to have and a couple of dress rehearsals.  A very different experience without an in person audience!

So how are we doing so far? We have sold about 700 copies which is not as good as our first book but we’re told it’s pretty good in today’s environment.  If you want to order a copy for yourself, a friend or family member just go to Amazon.  It only costs $19.95 and could make someone’s road to retirement easier!